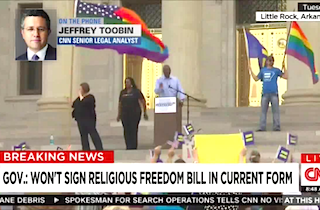 During his press conference Wednesday morning, Gov. Asa Hutchinson (R-AR) said he would not sign a controversial “religious freedom” bill in his state until it is brought in line with a federal version signed by former President Bill Clinton in 1993. But immediately following the speech, CNN legal analyst Jeffrey Toobin said this was nothing but “political double-talk.”

“There is only one issue going on here, which is whether private businesses should be allowed, in the state of Arkansas, as in Indiana, as in Georgia, where these controversies are going on, do these individuals allow private businesses to not do business with gay people?” Toobin said via phone. “The idea that you can compromise and find some language that allows people to not do business with gay people and also protect them from from discrimination, it’s just impossible.”

“There are no compromises available here,” he continued. “People either can refuse to do business or they can’t. And all these politicians trying to pretend that there’s some middle ground, there’s none. And that’s why none of these amendments so far have succeeded.”

When CNN’s John Berman asked Toobin if he thinks there is a way to keep parts of the bill that simply protect religious freedom while eliminating those that license discrimination against LGBT patrons, Toobin said it would be unlikely to pass. “That’s the whole purpose of the bill,” he said.