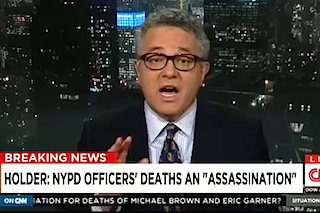 New York City Mayor Bill de Blasio has seen has relationship with the NYPD deteriorate even more than it already had over the past 48 hours following the random murder of two police officers by a man who claimed association with the protest movement over the deaths of Michael Brown and Eric Garner. But as the top union for the New York police continues to denounce the mayor’s rhetoric, CNN contributor Jeffrey Toobin called their actions “totally disgraceful.”

“I think the union leadership of the New York City cops has been totally disgraceful. The kind of language they’re using, saying the blood is on the hands of Mayor de Blasio is ridiculous,” Toobin said. “There is nothing that Mayor de Blasio said that inspired this evil man who killed his girlfriend or shot his girlfriend earlier in the day, this psychotic to kill these two brave police officers. I think the union officials have done nothing but poison the relationship in the city, and I don’t think you can blame Mayor de Blasio for that.”

Days before the shooting, The New York City Patrolmen’s Benevolent Association posted a letter on its website for officers to sign urging them to ban the mayor from attending their funerals should they be killed in the line of duty. On Saturday, when de Blasio arrived at the hospital for an NYPD press conference, officers could be seen literally turning their backs on him as he walked by.

“There’s blood on many hands tonight. Those that incited violence on this street under the guise of protest, that tried to tear down what New York City police officers did everyday,” Patrolman’s Benevolent Association head Patrick Lynch said over the weekend. “That blood on the hands starts on the steps of city hall in the office of the mayor.”