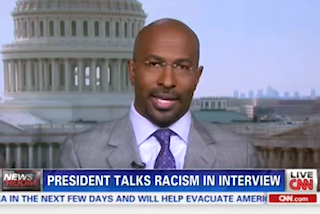 What did CNN’s Crossfire host Van Jones think when he read President Barack Obama’s latest quote about race in this week’s New Yorker profile by David Remnick? “I thought that actually was a pretty honest and accurate assessment.”

“There’s no doubt that there’s some folks who just really dislike me because they don’t like the idea of a black President,” Obama told Remnick during one of their many interviews over the last few months. “Now, the flip side of it is there are some black folks and maybe some white folks who really like me and give me the benefit of the doubt precisely because I’m a black President,” he added.

Obama’s quote was singled-out by many sites across the right–wing web as being in some way inflammatory, but Jones told Wolf Blitzer Monday afternoon that it’s a perfectly reasonable comment for the president to make.

“It’s not surprising to me race comes up when you have the first black president, elected so quickly after the Civil Rights Movement,” Jones said. “One thing that’s interesting to me, we have actually in some ways gone backwards.” While it’s gotten “easier” for Americans to talk about issues like gay rights, immigration and “even marijuana,” he said “there’s still this discomfort” when it comes to African-American issues, “and I think President Obama does bring that out in people.”

Jones suggested that because leaders like Obama don’t want to be seen as “playing the race card,” the “black agenda has in some ways stopped.” He added, “In some ways, ironically, we’re actually maybe moving backwards on black racial issues, even as we move forward on other civil rights issues.”