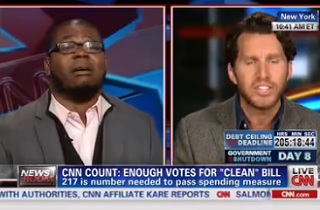 On CNN Newsroom Tuesday morning, a conservative commentator compared President Obama‘s signature health care law with something entirely inappropriate, which makes this what we in the biz call “a day ending in -day,” but what makes CNN contributor Will Cain‘s narrow comparison of Obamacare with Jim Crow laws special is HLN contributor and political science Professor Jason Johnson‘s priceless reaction.

Discussing the arguments against the Republican Party’s decision to hold the continuing resolution to fund government and/or the debt ceiling hostage in order to weaken or destroy Obamacare, Cain argued that “There are two arguments made against the legitimacy of a government shutdown. One is this idea that we had an election. He was re-elected in 2012, and therefore the argument is over.”

That’s an argument that has been made by no one, ever, but Cain counters it, anyway, with the fact that “there were also many of the members of the House of Representative that were also elected. Did they not come in an electoral mandate and responsibilities to constituents?”

Republicans actually lost the Congressional popular vote by almost 2 million votes, but held their majority thanks to gerrymandering. Even given that fact, though, not even President Obama begrudges Republicans the legitimate exercise of their legislative powers.

“But the second thing is the law argument,” Cain continued, “we hear ‘It’s the law.'”

Again, not an argument that anyone is actually making.

“There are many laws, many bad laws, from Jim Crow laws before to silly laws today,” Cain added, over Professor Johnson’s protests. “And it doesn’t mean that’s an argument.”

Professor Johnson responded “Jim Crow? That doesn’t make any sense one way or the another. And I didn’t say the law is an argument. I said that there are other he strategic ways that this can be done. They’re representing their citizens and the United States, and holding the entire US economy, and putting the global economy on hostage, because you don’t like a particular policy.”

The argument that is being made is that Obamacare is a law that has been tested in every fashion that our democracy allows, it was passed by both houses of Congress, signed into law by the President, found constitutional by the Supreme Court, resisted 42 legislative attempts to repeal or weaken it, and ratified by an overwhelming reelection. Jim Crow laws were overturned by a series of Supreme Court cases, and further eliminated by legislative means. Whether you think Obamacare is a bad law or a good law, it has withstood challenges that Jim Crow could not, and it attempts to remedy injustices, not codify them.