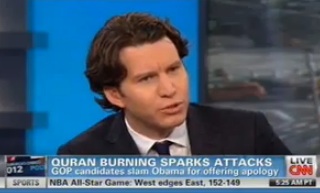 “Just go back in history a little bit to 9/11. President George W. Bush, I sure had my differences with him,” Durbin observed. “But I thought he got it right and he stuck with it through his Presidency. He said our war is not with the religion of Islam. Our war is with those who would distort it and turn it into terrorism. I think that was a bright spot, kind of a guiding principal that was adopted by President Obama. Now listen to these Republican candidates for President. They are at war with Islam. What the President’s trying to do — ”

“Senator Durbin, I haven’t heard one thing that backs up with you suggested!” Cain exclaimed. “Just give me an example. How are they at war with Islam?”

“Newt Gingrich saying that the President is guilty of appeasement, by saying that it was an unintentional act and that he believes we should not have destroyed these Koran and should have basically said we’re sorry that it occurred…”

“I don’t see how that amounts to war on Islam,” Cain pressed.

“What you listen to is incendiary rhetoric coming out in a very delicate situation,” Durbin explained. “Lives are at stake here, the President is showing leadership. The President is stepping up, trying to calm a situation. These three candidates are coming on television doing the opposite.”

Host Soledad O’Brien stepped in and moved the subject to what the “fix” would be in the situation, diffusing the back and forth. Later in the segment, Durbin blasted both Rick Santorum and Gingrich, after O’Brien quizzed him on what he thinks of the duo from his time serving with them in Congress.

“I think we’re coming to understand who they really are,” Durbin opined.

“That was a very political answer!” O’Brien said “What does that mean?”

“Look at this: there are 80 Republicans serving in the House today who served with Newt Gingrich as Speaker. I think you can count on one had those who are supporting him. It’s an indication of their knowledge of the man and their trust in his leading our country.

“On Rick Santorum’s part,” Durbin continued, “what we are seeing now as he tries to bring the cultural wars to the front, make this part of the campaign, is a real definition of who he was in the United States Senate. It was always a cultural war. It was always a battle about sexual preference, or a woman’s right to choose. For him, that consumed him as a United States Senator. And I think that’s what’s leading his campaign.”