CNN’s Wolf Blitzer on Protest Rhetoric: ‘You Have To Respect the President’
video

CNN’s Wolf Blitzer on Protest Rhetoric: ‘You Have To Respect the President’ 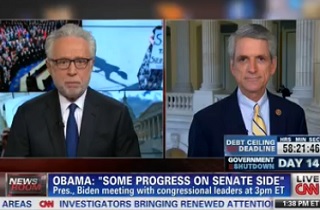 Over the weekend, a protest over the government shutdown by veterans turned ugly, and on CNN Newsroom Monday afternoon, Wolf Blitzer asked Rep. Scott Rigell (R-WI) to comment on that ugliness, specifically remarks by Freedom Watch’s Larry Klayman who suggested President Obama “put the Quran down.”

Rigell strongly denounced the comments, telling Wolf that “I have a visceral response to that, and I repudiate it. It doesn’t reflect my personal values. my 90-year-old father right now, Ike Rigell, is listening right now, and he raised me to say it’s always the President, the President of the United States, we respect the office, and that type of language is harmful to our country.”

Blitzer agreed with Rep. Rigell, remarking “Well said. You can can certainly disagree with policies, but you have to respect the President of the United States. He is the President, not only twice elected, but the last time by more than 5 million votes of the American people.”

That sentiment would seem to be uncontroversial, but in this political era, any gesture of generosity, even calling the President “the President,” can cause backlash. Rep. Rigell won his 2012 House race by a comfortable eight points. Wolf Blitzer, for his part, is the face of a network that is a favorite target of media watchdogs on both sides, so it will be interesting to see if even this mild statement becomes fodder for outrage.