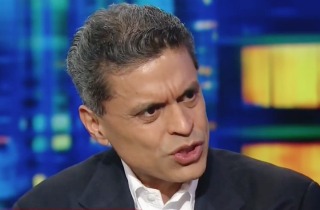 CNN’s Fareed Zakaria wrote a column for The Washington Post in which he speaks out as a Muslim against Donald Trump‘s “un-American” antics and how he’s “appalled” by the leading GOP candidate’s “bigotry and demagoguery.”

In the column, Zakaria says Trump’s fearmongering and proposed Muslim ban “poisons the atmosphere” and “forces people who want to assimilate, who see themselves as having multiple identities, into a single box.”

He ends by asking a big question: “I hope decades from now, people will look back and ask, ‘What did you do when Donald Trump proposed religious tests in America?'”

Zakaria appeared on CNN tonight to talk about his thoughts with Don Lemon. He admitted for so long he’s been reluctant to write openly about his own identity, but said, “You can’t not be moved viscerally, emotionally because what he’s doing in a sense is he’s dehumanizing.”

He said that “Trump has realized the path to the Republican primary voter” isn’t through putting out policy proposals, it’s “through the gut.”

Trump has recently been saying that people need to stop being so afraid of being labeled politically incorrect to report if they see any Muslims carrying out suspicious activity. He told a crowd, “I promise I will defend you from profiling.”

Zakaria found it concerning Trump is pushing a “weird Orwellian police state… where you’re pitting everyong against each other.”