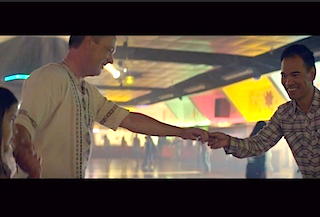 Rather than back away from the controversy surrounding the multilingual “America the Beautiful” ad that ran during Super Bowl XLVIII, Coca-Cola has decided to double-down on the commercial’s message of multicultural unity by running an extended, 90-second version during Friday night’s Winter Olympics opening ceremony on NBC.

The primary addition in the ad is an intro that includes one of America’s official mottos, and its English translation on the screen:

OUT OF MANY, ONE

Ironically, Stephen Colbert used that phrase as an example of how ridiculous the reactions to the original ad were in his response to the controversy earlier this week. “Yes, the old E Pluribus Unum,” Colbert said. “That’s Latin for ‘Speaka the English.’

In a press release promoting the new ad, Coca-Cola defends its core message, and stresses the fact that the young singers on the backing track are in fact American:

Created specifically for this evening, the new spot reinforces the sentiment of unity and that America is beautiful and Coca-Cola is for everyone. It features people enjoying moments of happiness with one another over a delicious, refreshing Coke. The overall message of inclusion communicated by the ad reflects some of Coca-Cola’s most important values.

Still included in the longer version of the ad is the shot of a gay couple rollerskating with their daughter, an image that takes on far greater meaning in the context of the Sochi Olympics, where Russia’s anti-gay propaganda laws will be under sharp scrutiny.