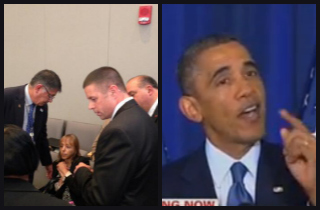 “I’m about to address it, ma’am,” Obama said as Benjamin went off about the hunger strike currently taking hold amongst Gitmo detainees. “Why don’t you sit down? But you’ve got to let me speak.”

“You are commander-in-chief! You can close Gitmo today!” she continued, despite Obama’s repeated protests that he intended to address those issues himself.

“You should let me finish my sentence,” he said before explaining his desire for Congress to make it easier to transfer detainees out of the camp, allowing him to fulfill his promise to close Gitmo. “I am confident this legacy problem can be solved, consistent with the rule of law.”

Obama also added that he is willing to cut the heckler “some slack” because “it’s worth passionate about” the indefinite detention of the prisoners without formal charges.

Several minutes later, Benjamin interrupted once more, decrying the administration’s killing of 16-year-old American citizen Abdulrahman al-Awlaki with a drone strike. Instead of protesting her interruption, Obama paused his speech and allowed her to rant while security attempted to remove her from the back of the room.

Photo of her removal via Ryan J. Reilly: 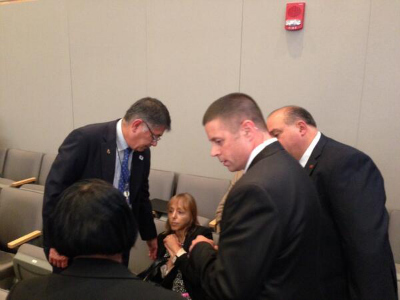 After Benjamin’s voice faded from the auditorium, Obama said that despite their agreements, “the voice of that woman is worth paying attention to.” A smattering of applause ensued.