Colbert Agrees with Fox: Torture Is Cool and ‘America Is Awesome’
VIDEO

Colbert Agrees with Fox: Torture Is Cool and ‘America Is Awesome’ 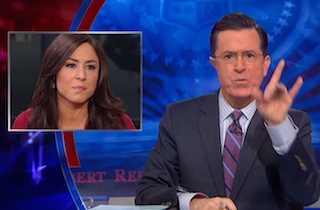 “What is the point of telling us all this rough stuff?” Stephen Colbert asked, in reference to the new CIA torture report Wednesday night. “No one still thinks that it’s OK to do something like this.”

From there, Colbert cut to a clip of The Five’s Eric Bolling clarifying, “For the record, I still think it’s OK to do something like this, as long as it’s done in a fair way.” The Fox host then referred to the actions of CIA officers as “torture” before quickly correcting himself with “enhanced interrogation techniques.”

“I am with Fox’s Andrea Tantaros, who is stoked for America, come whatevs,” Colbert added before playing the clip of that host defending the CIA’s techniques on Outnumbered.

“The United States of America is awesome,” Andrea Tantaros declared Wednesday. “We are awesome. But we’ve had this discussion. We’ve closed the book on it. The reason they want the discussion is not to show how awesome we are. It’s to show us how we’re not awesome.”

“Yeah, that’s what they want,” Colbert agreed. “But, we are awesome. And we have to be awesome, because the people we’re fighting are totally radical! And that’s why we had to resort of extreme measures!”

Later, Colbert took on Fox & Friends’ host Brian Kilmeade’s assertion that George Washington was America’s first torturer. As it turns out Kilmeade is not a historian and those suggestions have no basis in fact.