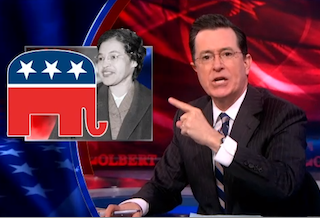 It’s been four whole days since the RNC ended racism once and for all with one poorly-worded tweet commemorating the legacy of Rosa Parks. During his “Tip of the Hat/Wag of the Finger” segment Wednesday night, Stephen Colbert commended the GOP for “finally giving proper credit” to the civil rights pioneer.

After wagging his finger at the Obama Administration’s Core curriculum for abandoning cursive, Colbert turned to the RNC’s Twitter gaffe. “I am tired of conservatives being accused of being insensitive to black people,” he began. “We get it, it’s been a rough haul.” First, Colbert corrected the GOP for calling what Parks did a “bold stand” instead of a “bold sit.” But then, he turned the tables, saying he doesn’t get what the “big deal” about Rosa Parks is. “I refuse to give up my seat all the time.”

“I am giving a tip of my hat to the RNC for reminding everyone that Rosa Parks ended racism,” Colbert declared. Unlike some of the GOP’s critics, Colbert agreed that racism officially ended on that day in 1955 when Parks refused to give up her seat on the bus. He said anyone who doesn’t think Parks deserves the credit the RNC was willing to give her is a “racist, which you cannot be, thanks to Rosa Parks.”

Below is the controversial tweet from the RNC, which was later amended to read “Today we remember Rosa Parks’ bold stand and her role in fighting to end racism.” 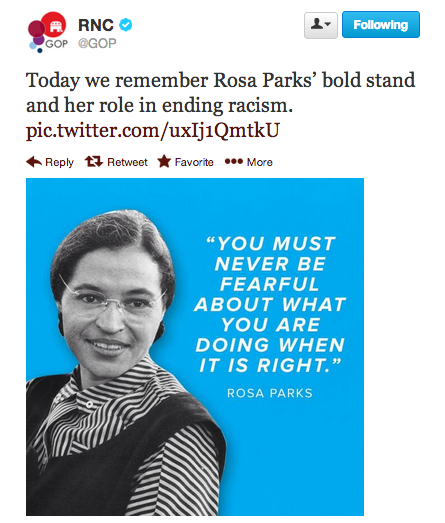