Colbert Asks Jay Carney: ‘Why Are You Quitting, You Quitter?’

Colbert Asks Jay Carney: ‘Why Are You Quitting, You Quitter?’ 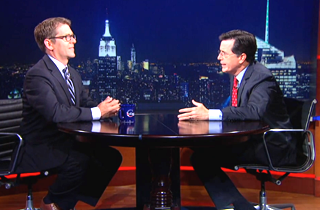 With 24 hours left in his capacity as the White House Press Secretary, Jay Carney visited The Colbert Report last night to receive the tough questions from Stephen Colbert, like: “Why are you quitting, you quitter? Only three years?! Man up. There’s a war about to start up in Iraq again. Don’t you want to answer those questions?”

They then covered a diverse range of topics, such as Carney’s realization that he’d been one of the longest-serving press secretaries in the past few decades (“I didn’t realize it was such a high-burnout job”), and also shared one of his biggest regrets: “Occasionally, I took the bait.

“When you’re at the podium, you’re a little above everybody else,” Carney elaborated. “You can dictate, a little bit, how the briefing goes by calling on the next person. And it’s easy to win an exchange: when somebody’s getting riled up and filled with righteous indignation, and if they’re really obnoxious, and you get a little rattled and you sort of engage. You finish the exchange thinking ‘I won that. I killed.’ And then you look at it later on TV and you realize that nobody actually sees the entire exchange. They just see you wagging your finger or looking like a jerk.

“It was to Jonathan Karl of ABC News,” Colbert responded. “You two had some tense moments, right? Now, why don’t you guys just get a room?”