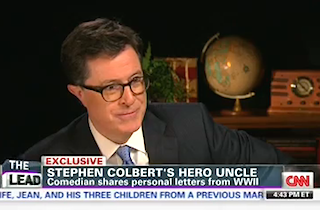 On Friday, CNN’s Jake Tapper welcomed an out-of-character Stephen Colbert to The Lead, where he shared letters from his uncle, 1st Lt. Andrew Edward Tuck III, a World War II paratrooper who went into Normandy on D-Day exactly 70 years ago today. Colbert got visibly emotional as he read aloud from letters that his uncle sent home.

“He landed in a little schoolyard,” Colbert said of his uncle’s arrival by parachute in France. “He was one of the first on the ground and these Germans were patrolling and they grabbed him right away.” In the confusion that followed, Tuck managed to escape and join up with his company later.

While the letters contained a lot of darkness, they also feature that signature Colbert-style humor. “Just before dinner I went to a snazy little cafe and imbibed quite freely in cognac,” Colbert read. “Result? Mild paralysis. In the process, i met a very beautiful model who spoke about three words of English, but was a real lexicon with the hands and eye.”

“They were just kids, though everybody in photos from World War II looks like they are 40,” Colbert told Tapper. Ultimately Tuck was killed at the age of 23 in a Jeep accident in Austria.

“She gave it to all of us with such love of her brother,” Colbert said of his mother, his voice breaking. “And it’s like we knew him. I know I didn’t, but these letters and my mother’s love is a big reason why I feel like I knew him. And I feel like we lost him.”