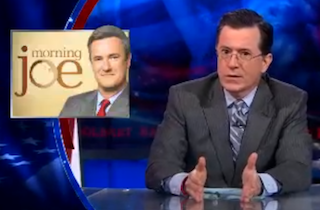 Stephen Colbert began a segment on Thursday night talking about the United Nations, but soon enough, it took a turn to the cable news world, leading Colbert to zone in on who he really wanted to talk about: his recently proclaimed nemesis, MSNBC host Joe Scarborough. This time around, he tackled Scarborough’s comments about violent video games during a discussion about reducing gun violence.

Giving the UN “a wag of the finger,” Colbert took aim at the organization for “going after what we hold more precious than our children: our guns” — by passing a U.S. backed treaty that the NRA. The UN has argued gun control will create a safer international community, but Colbert wasn’t buying it (proving his point with airtight Hitler logic).

But he digressed, turning his attention instead to the ongoing domestic gun debate — issuing another “wag of the finger” to Senate Republicans, who got “cold feet” after vowing to filibuster a gun bill. No one is talking about the real problem in this debate, Colbert lamented, clarifying that “no one” tends to mean one Joe Scarborough.

Scarborough “hit his head on the nail” on Morning Joe, railing against violent culture and specifically violent video games. “Yes, watching something over and over again can make you forget the difference between fantasy and reality,” Colbert asserted. “For instance, sometimes I mistake Morning Joe for a news show.”

He went on to offer a “tip of the hat” to those with the courage to tackle the real problem: “fake guns.”