Colbert Declares Victory over ‘Every Other News Organization — and CNN’ 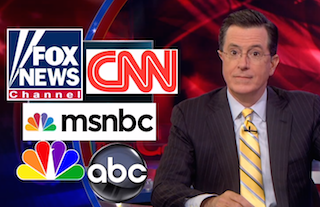 This week, a new study from the Annenberg Public Policy Center confirmed what many media watchers already believed: The Colbert Report is better at teaching viewers about campaign finance issues that any other major news source. On Wednesday night, Stephen Colbert celebrated his victory over “every other news organization — and CNN,” but also promised to strive for a less educational, more gut-based program in the future.

Colbert briefly reviewed the history of Colbert Super PAC, which came to an end once he reached his goal of collecting over $1 million that he was “free to spend in total secrecy.” The study found Colbert’s approach more effective because viewers “get to see the process” instead of having someone just tell them what it is.

“So let that be a lesson to you, Fox News,” Colbert said. “Show, don’t tell. If you want your viewers to have a better understanding of your editorial position, they need to see you sucking Ted Cruz’s balls.”

But Colbert had to apologize to his audience for informing them so much given his initial promise to “feel” the news at them. “Clearly, I must work harder at informing you less,” he said. “And to do that, I humbly bow myself before the masters.”

After a worst-of cable news montage, the host said, “Wow. The bar of lowness has been set very high.”