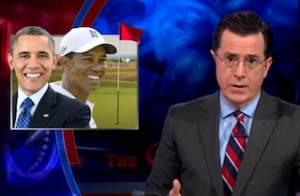 Despite President Obama‘s claim that his is the “most transparent presidency” in history, Stephen Colbert claimed Tuesday night that it’s actually one of the “most secretive.” Colbert pointed to recent gripes from the mainstream media that they were unable to access Obama’s weekend of golf with Tiger Woods and others in Florida.

Colbert was just as outraged as the rest of the media voices, arguing, “It’s one thing to keep us in the dark about a fleet of flying robo-assassins, but a round of golf on your day off? Where’s the judicial oversight?” He added, “There are a lot of holes in this story. Specifically 18 of them,” before demanding more answers on “water-hazard-gate.”

But as Colbert says, this weekend was just the “tip of the secret-berg.” He then went on to describe what is arguably the president’s most private activity of all, when multiple times a day Obama “locks himself alone in a small tiled room.” Colbert demanded to know what the president is doing while he’s in there, saying “it does not pass the smell test.”

While White House Correspondents Association president Ed Henry is insisting that the media’s outrage over this past weekend is “not about golf — it’s about transparency,” Colbert is using his platform to mock how desperately the press want to invade the president’s every move. Can’t the media demand transparency on drones but let Obama play golf in piece?