Colbert Embraces Steve King’s Immigrants As Dogs Analogy: ‘I’ve Already Got One Digging In My Yard’ 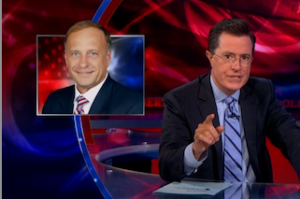 Rep. Steve King (IA) has had a very trying week, going head-to-head with Univision’s Jorge Ramos and CNN’s Wolf Blitzer over controversial comments he made comparing immigrants to dogs and saying they’re 100 times more likely to be drug runners than valedictorians Fortunately for King, he got some much-needed moral support from Stephen Colbert Thursday night.

After playing the clip of King’s most recent statement about immigrants, in which he said they have “calves the size of cantaloupes” from “hauling 75 pounds of marijuana across the desert,” Colbert defended the congressman, saying, “C’mon, we all say it behind closed doors.”

“One of the best ways to choose who gets into this country,” Colbert continued, “is by what size produce their muscles are. The point is it’s all about choosing the good ones.” From there, the host went to King’s 2012 analogy about picking the best “bird dog.”

“Los Latinos were offended by the immigrants as dogs analogy,” Colbert said. “Those people have such thin coats.” King defended the comments to Ramos by saying he was actually “complimenting” immigrants by comparing them to dogs. “The same way I’m complementing Steve King when I call him a tool,” Colbert added.

“So, please, it’s not about Mexicans being animals,” Colbert said. “Steve King is just saying they are human beings, who, if you pick the right ones would make great pets. I’ve already got one digging my yard. Luis is loyal, he’s a member of my family, and at the first sign of hip dysplasia I will send him to a farm upstate. Literally. I’ve got a lot of string beans growing up there.”