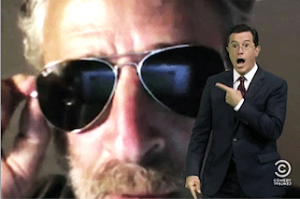 If this is what happens when Stephen Colbert’s guests cancel on him, they should do it more often. Last night on his show, Colbert turned a booking disaster in the launch of his “StePhest Colbchella ‘013” series into a major victory by going his own way and delivering an epic dance party that featured set visits to The Charlie Rose Show, Late Night with Jimmy Fallon and America’s Got Talent, plus a Middle East Skype session with a heavily-bearded Jon Stewart.

It all started just one day earlier when fellow Viacom subsidiary MTV blocked the band Daft Punk from making their highly-anticipated appearance on The Colbert Report because of an upcoming “surprise” performance on the MTV Video Music Awards next month. Colbert used the opportunity to brutally mock MTV head Van Toffler on air, even reading aloud an embarrassing email in which Toffler actually said, “checked with my peeps and… they’re feeling funky on this one.”

Eventually, Colbert figured out what had happened. He’d been “Daft Punk’d.” This led to the arrival of Ashton Kutcher, who said Colbert didn’t get “punk’d,” he got “fuck’d.” Making the best of the situation as only Colbert knows how, he decided to deliver his own Daft Punk-inspired performance, dancing his way through the TV media landscape to “Get Lucky” with appearances from Bryan Cranston, Jimmy Fallon, Nick Cannon, Matt Damon and a lot more. To top it all off, he got the other “Song of the Summer” singer Robin Thicke to perform a last minute edition of “Blurred Lines.”

Watch video in two segments below, via Comedy Central: