Colbert Goes After Rand Paul, Marco Rubio For ‘Selling Out Their Values Just To Get In With The Cool Kids’
video

Colbert Goes After Rand Paul, Marco Rubio For ‘Selling Out Their Values Just To Get In With The Cool Kids’ 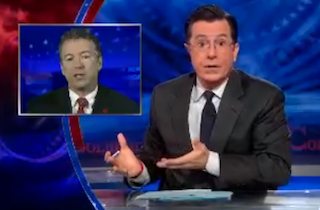 “We’ve lost our way as a nation,” Stephen Colbert lamented on Thursday. After immigration amnesty and gay marriage came another blow: A new poll says majority of Americans now support marijuana legalization. Colbert was especially upset, however, at the Republicans who are “selling out their values” and supporting it, too — in a desperate attempt to woo young voters.

Even worse than two states legalizing marijuana for recreational use (in addition to those who allow medical marijuana), Colbert asserted, is that now “people are comparing this pot-tastrophe to another attack on our values.” Meaning: same-sex marriage.

“Oh, I can’t help who I am,” he mocked, “I was born attracted to watching seven hours of Planet Earth while eating a sack of croutons.”

Why are we giving up?!” he questioned, skewing a chart about the War on Drugs so it just looks like a nice landscape (see? harmless). He was further appalled to note that even some Republicans are buying into this silly drug idea. Particularly, one Sen. Rand Paul (R-KY).

But Colbert took a step back, questioning whether there’s perhaps a method to Paul’s “reefer madness.” Cue a Sunday-show clip of Paul noting he could appeal to younger voters, many of whom support pot legalization.

“Yeah, kids! What about Rand Paul?” Colbert remarked. “He’s pro-pot! And if you get high enough, maybe you’ll forget all the reasons you wouldn’t vote for him.”

The GOP “is desperate for the youth vote,” yes, but Colbert didn’t want the party’s presidential hopefuls, “like Marco Rubio, suddenly selling out their values just to get in with the cool kids.”

(Because in any case, it may already be too late.)