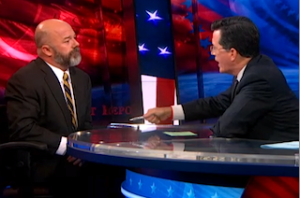 Stephen Colbert met his match last night on the issue Syria when he invited The Dish’s Andrew Sullivan on The Colbert Report for a spirited debate. Specifically, Colbert took issue with the the United Nations resolution, which he said would be rather “U.N.-likely to succeed.”

Sullivan surprised Colbert by saying “Yes, because the world has seen America go into these places alone and make an almighty mess, in which hundred of thousands of people died and we lost trillions of dollars.” He said he would much rather have Russia and China “do out dirty work for us.” On top of that, Sullivan added that if Bashar al-Assad does use chemical weapons again, Obama “has a much stronger case to make” for military action.

Colbert came back at Sullivan by saying that if he wants to be an American citizen, he needs to understand “American exceptionalism,” which in his mind means, “We get to do whatever we want and people should say, ‘Hey, that’s good, because America did it.”

Sullivan argued back that we need to U.N. to help prevent war between the great powers in the world, to which Colbert asked, “How can we be a superpower if you do not exercise super power? That’s like saying, I’m a fantastic dancer, I just don’t want to get up right now.”

Colbert cut his guest off before he could make his final point, but clearly these two could have gone on debating for much longer. And while the segment definitely included some laughs, it was in many ways more substantive than anything you’re likely to see on Crossfire.