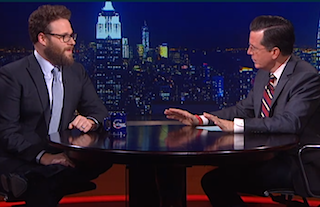 Before Stephen Colbert welcomed his guest Seth Rogen to the stage last night, he presented a quick review of the Sony hack story and the reaction from Kim Jong-un’s North Korean regime. But when he realized he had spent much of the past few years saying terrible things about the “supreme leader,” he tried to make up for it by declaring that “North Korea is the greatest country on the face of the Earth.”

And before going to commercial, he teased his upcoming guest as the “lie-peddling filmmaker behind The Interview, decadent capitalist pig and enemy of the Democratic People’s Republic: Seth Rogen.”

While Rogen led the interview with a weed joke, Colbert let him know that he has bigger problems now, namely “going toe-to-toe with the North Koreans in thermo-nuclear conflict.” When Rogen said he just wanted to make a movie that has “one foot in reality,” Colbert asked, “Is it appropriate to make jokes about real things in the world?”

Rogen said he did consider changing the name of the North Korean dictator in his script, but then realized the only person’s feelings he would be spare would be Kim Jong-un. In the end, he said he just tried to make the character in the film, “for lack of a better word, adorable.”

Watch both segments below, via Comedy Central: