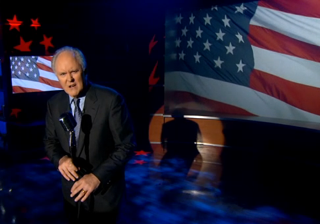 Newt Gingrich had a bad week. Luckily, he hired fully-trained epic poets to write his press releases, which resulted in something of a penned by political bard/spokesman Rick Tyler. While many tried to fully capture the loftiness of Tyler’s press release explaining how the “right-wing social engineering” snafu was actually the product of left-wing media jiu-jitsu, Stephen Colbert didn’t take a chance on it: he asked Emmy- and Tony award-winning actor John Lithgow to give it a dramatic reading.

“This man will rise like the sourdough he appears to be made of,” Colbert said of Gingrich, defending the press release with reviews from the media that described it as “epic,” “florid,” and “overwritten.” As it is one of the few things to be accurately described as “epic”– as in “it makes Gingrich sound like Achilles”– Colbert gave Lithgow an American flag backdrop, and microphone, and let him roll.

The dramatic reading via Comedy Central below, followed by the text of the press release:


The literati sent out their minions to do their bidding. Washington cannot tolerate threats from outsiders who might disrupt their comfortable world. The firefight started when the cowardly sensed weakness. They fired timidly at first, then the sheep not wanting to be dropped from the establishment’s cocktail party invite list unloaded their entire clip, firing without taking aim their distortions and falsehoods. Now they are left exposed by their bylines and handles. But surely they had killed him off. This is the way it always worked. A lesser person could not have survived the first few minutes of the onslaught. But out of the billowing smoke and dust of tweets and trivia emerged Gingrich, once again ready to lead those who won’t be intimated by the political elite and are ready to take on the challenges America faces.