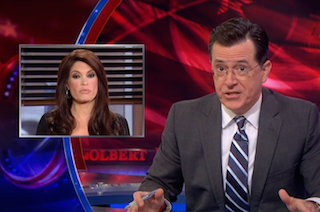 Monday night, Stephen Colbert followed up on his initial report on Sgt. Bowe Bergdahl’s release by weighing in on the “growing cable news consensus that he does not deserve to be alive.” Especially, he said, when you consider that we gave up the Taliban “Dream Team” to get him back.

“Great! Now who are we going to send to the real Olympics in 2016?” Colbert asked. Meanwhile, he added, “Everything about Bergdahl is an affront to the heroes who serve on the front lines of Fox News.”

On Fox host Kimberly Guilfoyle’s suggestion that Bergdahl was “lucky” U.S. forces didn’t send him home in a body bag, Colbert agreed. “That’s right, Kimberly,” he said. “If our soldiers had found him they might have arrested him, but they just as likely would murdered him in a heroic act of vigilante justice.”

Like other cable news hosts, Colbert dismissed the idea that Bergdahl’s five years in captivity may have been challenging and instead focused on the positives, like the fact that he reportedly played soccer with his captors. “For all we know, the Taliban’s mom brought orange slices,” Colbert said. “It sounds fun. I’m betting getting captured was clearly part of his GOOOAAALLL!”

Finally, Colbert turned to CNN, which reported that the Bergdahl story “almost makes you feel like” you’re watching the Showtime series Homeland. “Yes, and I’d almost think I was watching the news,” Colbert remarked.