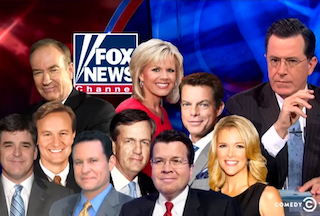 What would The Colbert Report be without Fox News? Given the vast amount of material Stephen Colbert gets from the #1 cable news network, he expressed how “enraged” he is by the “tawdry hit job” Murdoch’s World: The Last of the Old Media Empires

by “journalistic hack” David Folkenflik, who just happened to be his guest on last night’s show.

One of Folkenflik’s biggest scoops in the book concerns fake accounts Fox staffers set up to counter negative comments on blogs and news sites. “You have to police the comments section, that’s the most important part of an online article.” Colbert said, defending Fox. “It’s the only reason I know that the ongoing war in Syria is ‘GAAAAAAY! RON PAUL 2012!'”

Now that more and more people are getting their news on Twitter as opposed to blogs, Colbert and his staff decided they needed to do what they could to give Fox a hand. One of the show’s writers designed a Twitter bot that brilliantly replaces the names of actors movies in RottenTomatoes.com reviews with Fox News hosts and shows and tweets them out every two minutes under the new Twitter account @RealHumanPraise with the hashtag #PraiseFOX.

Since the show launched the bot a week ago, it has posted over 5,600 tweets and with the help of last night’s segment racked up more than 10,700 followers. There are obviously far too many glowing reviews of all your favorite Fox personalities to highlight here, but here are just a handful of recent gems:

As Colbert said of the plans for the project, “Like Bill O’Reilly, we’ll just keep talking until someone pulls the plug.”