Colbert: Obamacare So Bad It Makes Bachmann Look Like a ‘Genius’ 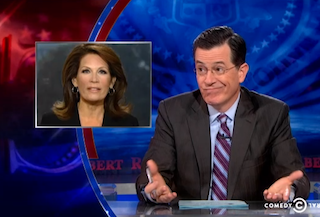 Rep. Michele Bachmann (R-MN) couldn’t have thought she could call herself a “genius” on national television and nobody would notice. One person who couldn’t help but pick up on Bachmann’s declaration was Stephen Colbert, who dutifully backed up Bachmann’s claim last night, saying, “If a self-certified genius like Bachmann was right about Obamacare, she must have been right about everything.”

But first, Colbert looked at Fox News contributor Charles Krauthammer’s latest predictions about the “collapse of American liberalism.” To prove “Count Chuck-ula” right, Colbert briefly took on the role of a liberal who returned from a social justice rally only to discover he couldn’t log on to HealthCare.gov. “Wait, what’s this, I can’t log on to Obamacare?” he asked. “Burn the gays!”

Moving on to Bachmann, Colbert played a clip of her saying, “We hate to say told you so, but quite honestly, we all look like geniuses now.”

“She’s right,” Colbert said. “The Obamacare rollout is so bad that by comparison Michele Bachmann is a genius.” He proceeded to play a montage of Bachmann’s greatest hits to demonstrate how she “must have been right about everything” she’s said over the years.