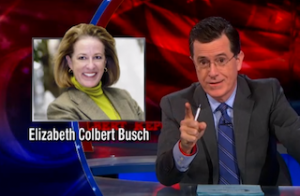 When Stephen Colbert‘s sister Elizabeth Colbert-Busch first announced she was running for Congress in South Carolina, the media immediately began to speculate about all the free air time she would be getting. So it was a bit of a surprise that Colbert waited close to four weeks to discuss it on his show.

Colbert finally brought up the candidacy of his sister “Lulu,” as he affectionately calls her, but he refused to give her any preferential treatment. “As a broadcast journalist,” Colbert told his audience, “I am obligated to maintain pure objectivity. It doesn’t matter that my sister is intelligent, hardworking, compassionate and dedicated to the people of South Carolina.”

But the real reason that Colbert can’t publicly endorse his sister is that she’s running as a Democrat. He listed off some the 16 Republicans already registered to run for the seat, recently vacated by interim-Senator Tim Scott, before settling on his preferred candidate: “actual candidate and former governor of the Appalachian Trail, Mark Sanford.”

Instead of giving his sister the “Colbert Bump,” the host offered some advice to her future Republican adversaries: ”This is how I used to win a lot of arguments with her when I was a kid,” he said. “Right after she makes a good point, repeat it back to her in a dumb voice.”

But if somehow all this added attention works in Elizabeth Colbert-Busch’s favor and she does get elected, Colbert invited her to appear on his popular series, “Better Know A District.”