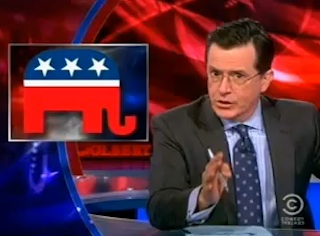 On the Colbert Report Wednesday night, Stephen Colbert observed that, now that Mitt Romney is a lock for the Republican nomination, “he has to do something that does not come naturally to him– appeal to voters. Specifically one key ‘demographico’… Republicans will need to work hard to capture the Latino vote instead of their current strategy of capturing Latinos.”

Colbert surmised that Romney would be a natural at connecting with Latinos because his own father was born in Mexico.

RELATED: Eva Longoria Tells Andrea Mitchell: Romney Is On Wrong Side ‘Of Every Issue Pertaining To Latinos’

“Romney has such Latino appeal that, according to a Fox News poll, if the election were held tomorrow he would claim a whopping 14% of them,” Colbert continued. “Now, 14% sounds bad, but 16% are undecided. And if Romney works hard and captures them he… would still lose very badly.”

Galvanized by Romney’s paltry Latino support, Colbert sprung into action and got his SuperPAC to put together a political ad that “explains the Republican position on Latino issues in a language they can understand: English with a Spanish accent.”