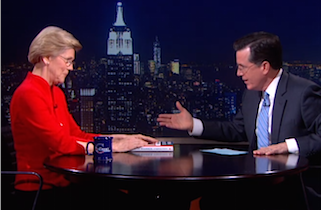 It’s been more than four years since Elizabeth Warren first appeared on The Colbert Report and in the intervening time, her profile has risen remarkably. On Monday night, Warren and Stephen Colbert faced off over the ideas on inequality she puts forward in her new book, A Fighting Chance

“You are welcome for the ‘Colbert Bump,'” the host said at the top of the interview, taking credit for Warren’s ascension to the Senate. In explaining her own story, Warren told Colbert about how she was able from humble beginnings, but that American dream became much more difficult sometime after Ronald Reagan became president.

When Warren accused the big Wall Street banks of “cheating people” on credit cards and mortgages, Colbert shot back, “What do mean ‘cheating people?’ You sign up for a credit card, you use the credit card, then you have to pay your bills. Is that too complicated for Harvard?” Later, he accused Warren of supporting “freeloaders” who don’t pay their bills. “It’s just more socialism!” he said.

“You’re right that there’s been a lot of freeloading, but the freeloading has been by the biggest financial institutions who got bailed out by the American taxpayers,” Warren said to cheers from Colbert’s crowd.

Later, when Warren lamented the fact that no one on Wall Street has gone to prison for deceiving the American people, Colbert explained to her that “you can’t put handcuffs on the invisible hand of the market,” adding, “What you call breaking the law, I call pushing the envelope.”

Grabbing Colbert’s hand, Warren said, “You can put handcuffs on people who push the envelope. When they break the law, they deserve to have handcuffs.”