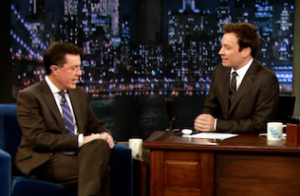 Stephen Colbert has been fairly quiet thus far about his sister Elizabeth Colbert-Busch‘s run for Congress in South Carolina, only mentioning it once on The Colbert Report since she announced last month. But last night, Colbert made his first serious comments about his sister’s campaign to Jimmy Fallon, and revealed he will be hosting a fundraiser for her this weekend.

Colbert explained his relative silence on the matter by saying he doesn’t want his “ridiculous” profession to “sully her good character.” He said, “It’s natural for her to run because she has the skills and something to offer society” and offered some more background details about her life. “She’s an incredible person. She raised three kids by herself on a salary of like $14,000 a year, then she went to college, made something of herself and now she’s going to be the Democratic nominee from South Carolina. Isn’t that incredible?”

He announced that he will be hosting a fundraiser for Colbert-Busch Saturday at a bowling alley in South Carolina. “We’re going to raise money in the bowling alley because we’re of the people,” Colbert said, adding that bowling is one of his favorite sports because drinking while playing is encouraged.

Fallon mentioned Colbert-Busch’s website where you can get more information and donate, which Colbert said he’s already done, “because you gots to do for your older sister.”

Of course, Colbert and Fallon’s late night conversation wasn’t all serious. Later in the show, the two hosts settled their long-standing friendly rivalry by singing a duet of of the classic song “Ivory and Ivory.”