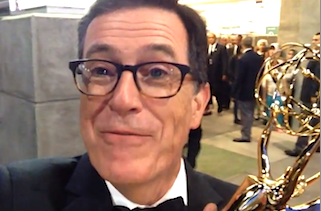 Stephen Colbert could have made it back to New York to do his show last night after winning the Best Variety Series Emmy Award for the second consecutive year. Instead, he aired a completely pre-taped show, featuring some fencing on Capitol Hill with Rep. Marcia Fudge (D-OH) and an interview with The Giver’s Lois Lowry and Jeff Daniels.

In a cold open video with Bridges, Colbert worked through his decision to simply play a show he recorded two weeks ago, before he went on his pre-Emmys summer vacation. If he decided to fly back, he said “the material will be more topical, which I think fulfills a sacred trust between me and my audience.” On the other hand, he added, “I don’t want to.”

On Bridges’ suggestion, he decided to film a quick post-Emmys message to his audience on a camera phone and insert that footage into the intro. But that wasn’t the only piece of new material in last night’s show. If you watched closely during the opening credits, the word “Colbore” flashed on the screen as Colbert jumped with his flag.

That was his way of referencing Gwen Stefani, who butchered the host’s name when she presented him with his Emmy, creating a near-“Adele Dazeem” moment.

Watch the cold open plus the opening credits below, via Comedy Central: