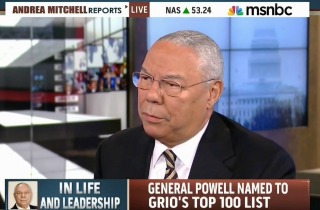 Appearing on MSNBC, former Secretary of State Colin Powell savaged the Republican Party of which he says he is still a member for catering to “elements” that are overtly hostile to people of other races or nationalities. Powell told MSNBC’s Andrea Mitchell that there are groups within the GOP who “demonize people who don’t look like the way they’d like them to look.” He added that, for this reason, he believes the GOP needs him more than the Democratic Party needs him.

Speaking with Mitchell about the need for immigration reform, Powell said that reforming the system was critical. “We are an immigrant nation,” Powell said. “People wonder if we’re still the great country that we pretend to be, or we present ourselves to be. The answer is yes.”

Mitchell noted that Powell has criticized the GOP in the past for harboring a “dark vein of intolerance.” Powell took the opportunity to repeat his criticism.

“There are certain elements of the party who go out of their way to demonize people who don’t look like the way they’d like them to look like or came from some other place,” Powell said. “I think the party has to deal with this.”

He said that even senior-level Republicans continue to make “statements about women” and “minorities” that make the party look “less tolerant than it should be.” Powell specifically cited voting laws which he said are designed to restrict minority access to the polls.