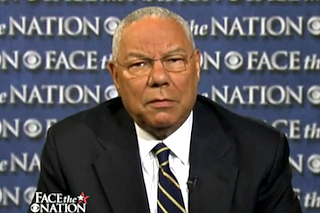 On Face the Nation Sunday morning, former Secretary of State Colin Powell chastised the GOP for their Voter ID laws and lack of minority outreach in general, telling host Bob Schieffer that the party is imperiling its electoral victories through unnecessarily punitive legislation and messaging.

“Many states are putting in place procedures and legislation that in some ways makes it a little harder to vote,” Powell said. “You need a photo ID. Well, you didn’t need a photo ID for decades before, is it really necessary now? They claim that there’s widespread abuse and voter fraud, but nothing documents that, nothing substantiates that. There isn’t widespread abuse.”

“These kinds of procedures that are being put into place, to slow the process down and make it likely that fewer Hispanics and African Americans might vote, are going to backfire, because these people are going to come out and do what they have to do in order to vote, and I encourage that,” he said.

Watch the entire clip below, via CBS News: