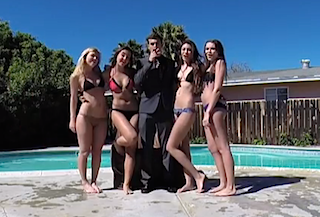 With a name like Luke Dzierzanowski, you have to find some way to stand out in politics. The San Diego State University sophomore who put out a YouTube campaign ad that caused a firestorm on campus lost his election for student government this week.

The video, which has racked up over 22,000 views since it was posted on March 10th, features a suited Dzierzanowski sitting in silence smoking a cigar as scantily-clad girls in bikinis splash around in a pool and jump on a trampoline behind him. “We’re voting for Luke,” the girls shout at the end of the ad. “Are you?”

An editorial in The Daily Aztec, an independent student newspaper at the school, called the video “sexist” and accused Dzierzanowski of “sexually objectifying” the women in it. “While I must commend Dzierzanowski for being the only memorable candidate, as I can’t even recall the other candidates’ names,” Anthony Berteaux wrote, “the video makes him memorable for all the wrong reasons as a degrading, attention-grabbing gimmick.”

In an interview with San Diego’s ABC 10, Dzierzanowski defended his video, saying it showed he is “good at communicating with people” and “very outgoing,” despite the fact that he did not speak any words in the ad. As for the charges of sexism, he said, “I’m not a bad guy at all and that was not my intention in any way, shape or form.”

Watch the interview below, via ABC 10: