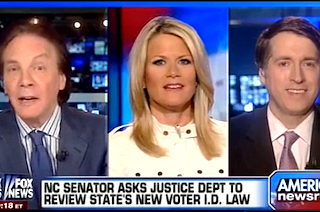 “I thought conservatives were against unnecessary legislation,” Colmes said, pointing out that North Carolina’s law went far beyond requiring an identification at the polls, but that it still did not address the areas where the limited cases of voting fraud had been detected. “This is a problem that does not exist.”

“Why are you so sensitive about asking someone to get an I.D.?” McCallum asked Colmes, as she said they were so easily obtained and needed to do things like purchase Sudafed.

“Voting is a right,” Colmes replied. “This is purely for the purpose of narrowing the Democratic vote…Why do you think it is that after the Supreme Court ruled on the Voting Rights Act, all of a sudden it was only the red states with red state governors with Republican legislatures that went and rushed to get in Voter I.D. as soon as they could? Why only red states?”

“They are more common sensical,” Lowry responded. “There is no evidence whatsoever in the states that have adopted these laws and most have, that it’s suppressed the turnout.”