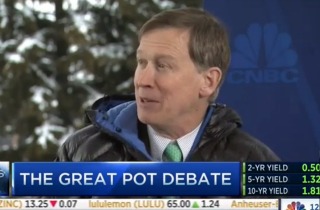 “You don’t want to be the first person to do something like this,” he said, highlighting the difficulties of creating a regulatory structure “from scratch” without support even from the federal government. “We weren’t so crazy about being on the cutting edge — the bleeding edge — of legalizing marijuana.”

Hickenlooper, speaking to CNBC’s Squawk Box at the World Economic Forum in Davos, Switzerland, also said he would have reversed the will of the voters if he had the power: “If I could’ve, you know, made a magic incantation, waved a wand the day after the election, I would’ve reversed the election and said, ‘this is a bad idea.'”

Hickenlooper also said the jury is “still out” on whether other states should follow suit. In his YouTube interviews yesterday, President Barack Obama acknowledged that more states are likely to follow suit with legalization. He also said the federal government should not spend its resources to enforce federal marijuana laws in states that already legalized it.

Watch the video below, via CNBC: