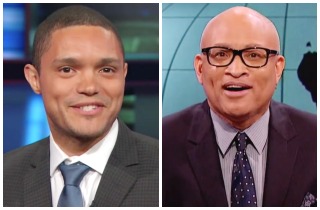 With the announcement of Trevor Noah as the next Daily Show host, Comedy Central will officially have two back-to-back late night shows hosted by black men; Noah and Larry Wilmore. (Not two African-Americans, Noah is South African.) And in an interview with The Hollywood Reporter earlier today, network president Michele Ganeless said that was not intentional.

Wilmore’s Nightly Show was billed, before its debut, as a showcase for voices that you don’t normally hear in late night, and Noah only adds to the diversity of late night. But as Ganeless explained, “This is not by design. Trevor and Larry were hired because they are the right people for these jobs.”

She repeatedly said that their chief concern was to find the right fit for The Daily Show. Noah stood out to them, Ganeless said, because he’s “so smart and so funny and such a citizen of the world that it just became very clear that he could do this job better than anyone else.”

RELATED: Everything You Need to Know About Trevor Noah, the New Daily Show Host

Ganeless was asked about the issue of female representation in late night and whether they reached out to any women about the position. This is what she said:

We talked to women. We talked to men. And the more we talked to Trevor, the more we realized he was the best person for the job. Thank God I did not have to do this on my own. We had the core senior team here at Comedy Central along with our boss Doug Herzog who runs the Viacom Music and Entertainment Group‎, and Jon was our advisor throughout the process.

You can read the full THR interview here