Comedy Central Star Was Behind ‘Dumb Starbucks’ the Whole Time 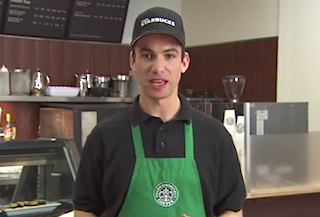 One day after it mysteriously appeared in a random strip mall in Los Angeles, the mystery of “Dumb Starbucks” has been revealed. It turns out that Nathan Fielder, the comedian and star of Comedy Central’s Nathan for You was the man behind the coffee shop that narrowly got away with using various Starbucks trademarks by invoking “parody law.”

Fielder revealed himself via the @DumbStarbucks Twitter account as the founder and president of the company. “By adding the word dumb,” he explained in a video, “we are legally allowed to use the coveted Starbucks name and logo because we have built the minimum requirements to be considered a parody under U.S. law.”

The comedian, who on the first season of his eponymous show, helped businesses like a petting zoo by staging a successful viral video, elaborated on the ‘Dumb Starbucks” premise during a press conference outside the store on Monday. “The word ‘dumb’ is just out of necessity,” he said. “My entire marketing plan depended on using their corporate logo to get attention and the only way to legally do it is by using ‘dumb,’ so it was the minimum we could do.”

Watch video below, via Bloomberg News:

While Fielder said he plans to open another “Dumb Starbucks” location in Brooklyn in the coming weeks, it appears that the LA flagship store may have been short-lived. But when the shop was ultimately shut down on Monday it had nothing to do with copyright infringement. The city closed it on health and safety code violations:

THIS JUST IN: Dumb Starbucks in Silver Lake shut down by health department. pic.twitter.com/YFzz15cimh