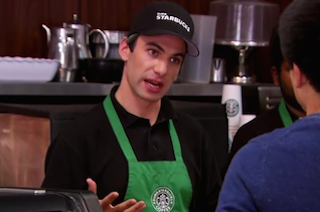 It was just over five months ago that a store labeled “Dumb Starbucks” took the Los Feliz neighborhood of Los Angeles, and subsequently the internet, by storm. Speculation ran rampant as scores of hipsters lined up around the block to get free cups of coffee from an operation that seemed to be so blatantly treading on Starbucks’ trademark.

It wasn’t until the day after the shop first opened its doors that we learned the whole thing was the brain child of Nathan Fielder, who came up with the idea for season two of his critically-beloved Comedy Central show Nathan for You. “By adding the word dumb,” Fielder explained in a promotional video, “we are legally allowed to use the coveted Starbucks name and logo because we have built the minimum requirements to be considered a parody under U.S. law.”

With season two of the show underway, the “Dumb Starbucks” episode is finally set to air next week. Comedy Central has just released the preview below, which shows what was happening inside the store before it unexpectedly blew up into the craze it became. The initial customers who came into the store seemed to think they were walking into an actual Starbucks before realizing things were a little off.

As for the actual store, it ultimately was not the trademark issue that brought “Dumb Starbucks” down. Because they didn’t have the proper licenses to serve food and beverages, the city of LA shut them down for health and safety code violations.