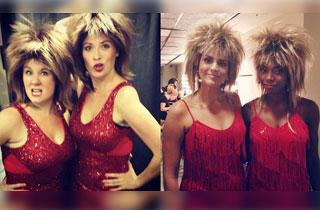 While watching Saturday Night Live last weekend, L.A.-based writer and director John Irwin noticed something oddly familiar about one of the sketches — namely, that the premise of one of the sketches was very similar to a sketch his friends performed at the famous Groundlings comedy theater.

For several weeks at the Groundlings, Vanessa Bruiser Ragland and Kimberly Condict performed the heck out of their brilliant and hillarious sketch featuring a Tina Turner tribute band singing “Rollin'” at a casino with their musings during the music pauses about the establishment’s food, the bad hands life dealt them, and a past gig on a Nebraska river boat– the sketch ends with the MC piping in.

Last night on SNL, a Tina Turner tribute band sang “Rollin'” with their musings in the music pauses about the establishment’s food, the Nebraska river boat they’re currently on and the bad hands life dealt them — the sketch ends with the MC piping in.

Other LA-based comedians chimed in, and alleged that SNL has a habit of stealing sketches all the time. “Over the years I have seen MANY, MANY sketches flat out stolen from my friends by Saturday Night Live. Nearly verbatim. Word for word,” wrote Groundlings teacher Ian Gary. “And everyone in our community goes ‘Oh man. That sucks.’ and nobody says anything because I guess SNL is still some dream for some people or they don’t want to get involved, or a million other reasonable things that stop people from standing up for each other when things are blatantly wrong….This is fucked up. This is stupid.”

Here’s the Groundlings version of the sketch:

And, for comparison, here’s how SNL did it: