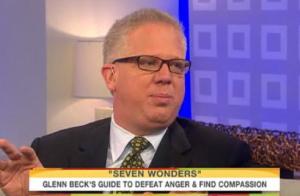 Glenn Beck appeared with Dr. Keith Ablow on The Today Show as they promoted their self-help book “The 7.” Meredith Vieira first questioned Beck about his goal in writing a book more focused on individuals than on politics, to which Beck replied “we fix our country by fixing ourself.”

In his personal life, Beck concluded that “I was a guy that I would have hated” before he successfully turned his life around. Then business really started to pick up as Vieira questioned Beck about whether some of his controversial rhetoric, including saying he wanted to poison Nancy Pelosi and beat Charlie Rangel to death with a shovel, contributes to a climate of anger and hate. Beck responded that a lot of what he says are jokes and that Vieira should “ask Jon Stewart that question, ask The Simpsons.” Vieira didn’t seem convinced and Beck implied that those in the media need to lighten up a bit, because “comedy is comedy.”

Given the theme of Beck’s book about self-empowerment and self-realization, Vieira was still searching for an admission by Beck that some of what he said might have been a mistake. However, Beck replied “political discourse is dicey sometimes, people don’t like it” and instead suggested the real problem, like in the case of the Arizona shooting, always is with the individual.