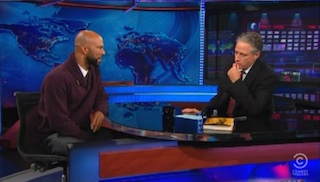 If you’re one of those people who remembers the ridiculous dust up this past spring in which various conservative politicians, blogs, and nearly every person who had an ounce of airtime on Fox News tried their darndest to make it a thing that the Michelle Obama had invited Common and Jill Scott to read poetry at the White House, here’s some nice closure. If you’re one of the lucky people who don’t remember it, well then, yes, it did happen and, yes, it was exactly as absurd as it sounds.

Anyway, last night, Jon Stewart, who famously got into an epic fight with Fox News after defending Common, had the rapper/actor/author on last night to promote his new autobiography. Unsurprisingly, half of the conversation was about the non-scandal.

Right from the beginning, Stewart joked that it was “dangerous” for him to have Common on be “associating with” him. Soon they were pointing out just how threatening the supposed “cop-killer rapper” looked in his terrifying sweater and tie ensemble. At one point, Stewart asked Common just what it felt like when the whole fire-storm started.

“At first it was humorous. I was like, ‘Really? They think I’m the person with negative energy and a negative rap artist?’ Then I realized they just didn’t know me because, if they had, they wouldn’t come out and say that I rap about killing cops. And anybody that knows me knows that I put out music about love, I put out music about social consciousness, community, God, having fun.”

Come on, Common. That’s totally unfair. Fox News definitely knew you. After all, they clearly had every single intern on staff going through every lyric you ever wrote hoping to find something offensive.

Anyway, Common continued to discuss how it felt to find out, while on the set of his new show (nice sneak plug there, sir), that Sarah Palin was trashing him. All in all, he seemed rather good natured about the whole thing and, as the interview wore down, thanked Stewart sincerely for defending him, jokingly asking him to be his new manager.