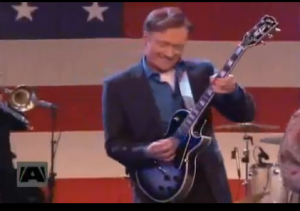 Conan O’Brien‘s final Tonight Show finished off by showing the longtime seven-months-long host grabbing a guitar, loosening his tie, and positively shredding in an epic closer: Lynrd Skynrd’s rock classic “Freebird” featuring his first Tonight Show guest Will Ferrell, complete with pregnant wife Viveca Paulin and cowbell; Ben Harper, ZZ Top’s Billy Gibbons, Beck, and Conan’s longtime bandleader Max Weinberg on the drums. It was a great moment, with two lines that stick out as appropriate: “I’m as free as a bird now, and a bird you cannot change” seems like it could well be directed at NBC and Dick Ebersol (and Ebersol’s “notes” to Conan on how he could “improve” his show) — if anything has shown that Conan’s brand of comedy has an audience, it’s the response to his departure, not to mention the pretty amazing collection of clips detailing the work he and his team did for his Tonight Show‘s short run. The second line is this one: “If I leave here tomorrow, will you still remember me?” That one isn’t hard.

*There is one little irony here: Prior to the “Freebird” rock-out, Neil Young performed “Long May You Run” — wonder if he was bemused to have been followed up by Skynrd, with whom he had a musical feud back in the day — Young wrote “Southern Man” and Skynrd responded by flipping off Young in “Sweet Home Alabama”: “Well I heard Mr. Young sing about it, Well I heard old Neil put ‘er down, well I hope Neil Young will remember, Southern Man don’t need him around anyhow.” Small little note, but I liked it.