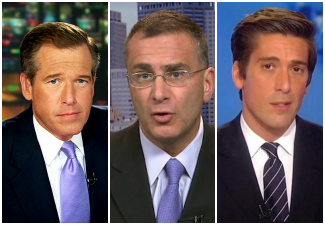 America loves streaks. For our parents and grandparents, it was witnessing (via radio or the morning paper) Joe DiMaggio‘s 56-game hitting streak in 1941, a record that will likely never be broken. For later generations, it was Cal Ripken playing in 2,632 consecutive games — another record that won’t be touched.

There are streaks in broadcasting as well. The most notable being broken two years ago after ABC’s Good Morning America finally beat NBC’s Today Show after an astounding 852 consecutive weeks at the top, a streak spanning over 16 years.

But then there are dubious streaks as well, like the one we’re currently witnessing courtesy of those aforementioned big alphabet networks.

The comments of MIT professor Jonathan Gruber have been a big story for the past ten days. Regardless of how you voted or whether you’re team red or blue, an official who worked closely with President Obama and his team on crafting the Affordable Care Act (visiting the Oval Office 19 times to specifically discuss a strategy) and later revealing on multiple occasions that the law was predicated on misleading “stupid” American voters is a story worthy of national attention and scrutiny. Those who don’t believe this are willfully blind, or as stupid as even an MSNBC panel says the White House thinks we all are.

With that in mind, here’s one more streak to chew on: Over the past ten nights, ABC’s World News Tonight and NBC’s Nightly News haven’t just buried the story in some throwaway segment late in their respective programs; they haven’t mentioned Gruber or the controversy in any capacity. Some could argue the decision to omit has been made because the news cycle has been heavy on the breaking news front. Except that hasn’t remotely been the case.

Ebola went from being the media’s modern version of the Black Death to as non-existent as CNN’s Bill Weir (whatever happened to that guy, anyway?). ISIS is still menacing but until it attempts to take Baghdad or pulls off some kind of terror attack against a Western target, it will remain a relatively stagnant story (compared to the attention it gained following the beheading of James Foley). And with Ferguson, until a grand jury decision is made, it’s simply all speculation.

We’ve been locked in a relatively standard news cycle since the midterm elections, thereby giving ABC and NBC nothing resembling cover for spiking the Gruber story.

Between the two, ABC’s story rundowns have been particularly vexing for the past month. If you recall, David Muir‘s newscast also ignored the lead-up to the midterms, not doing one story on it for months until just a few days before the election. By contrast, when Republicans were about to be shellacked in the 2006 midterms, ABC did 36 stories leading up to that election. With NBC, the (albeit, lame) excuse can be made that its cable arm that primarily covers political stories (MSNBC) could handle the heavy lifting on Gruber instead. But with ABC, which has no cable news outlet, that weak alibi disappears.

Again, put aside ideology and look at it objectively: If ABC or NBC had plenty of room in their respectively nightly news programs, why not explore the Gruber story? It is, as Fox’s Charles Krauthammer correctly characterized it last night, a “scandal of the first order.” The president was caught making another invalid truth when he portrayed Gruber as “some adviser who never worked on our staff,” a claim quickly proven false by Gruber’s 19 White House visits. Even former Obama advisers claim Gruber was a significant player.

So why spike it? Is it because Gruber isn’t a household brand? Would it have helped if his first name was Hans and the Nakatomi Plaza was somehow worked into the storyline?

As documented in this space, trust in media has never been worse. Gallup’s latest poll (September) in the media’s ability to report “the news fully, accurately, and fairly” is all-time low of 40%. That’s down 34 points from a Gallup poll taken post-Watergate, when the press actually held those in power accountable.

A different time, a different media. Bias is a term tossed around often in 2014. Oftentimes — not always — it’s a big reason in explaining why decisions are made around whether to cover a story aggressively or even at all.

ABC and NBC have a nice streak going these days.

But unlike DiMaggio or Ripken, it’s not exactly something anyone in the red or blue cheering sections should celebrate.