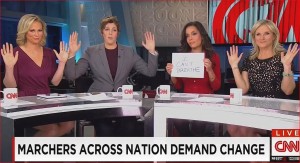 CNN has tried its share of opinion panel programs lately, all without success. AC360 at 10:00 p.m. ET weeknights recently went away without many noticing. Get to the Point–which resembled Fox’s The Five in terms of approach–lasted all of one week last year. And we’re all aware of the seemingly perpetual preemptions (and chemistry issues) that doomed Crossfire’s comeback.

So it’s been a bit confusing lately to see a Saturday afternoon program (3:30 p.m. ET) pop up on the network seemingly out of nowhere that appears to be an opinion program. This is the part of the column when the title of said program is normally shared, except this doesn’t appear to have one. CNN transcripts and my Fios TV Guide only say the show–hosted by Margaret Hoover, Sally Kohn, Sunny Hostin and Mel Robbins–is part of CNN Newsroom, which isn’t an opinion program. So for the purpose of this column moving forward, we’ll simply call the aforementioned opinion show, The Four.

And now, it appears The Four–which debuted under the radar on November 1st–has its very first controversy on its hands (literally) after a tweet sent by Ms. Kohn–showing each of the hosts raising their hands in solidarity with protesters in New York and Washington–took off on Twitter after the show yesterday. Some on social media praised the four for putting aside political differences to stand with those outside, while others were genuinely outraged (on the ideological front, Hoover is a moderate Republican, Kohn a decided Democrat, Hostin–a lawyer–generally leans left, and Robbins appears to be mostly somewhere in the middle).

Note: It is an opinion program (despite existing during a straight news hour for 30 minutes), so the hosts can do or say whatever they wish within reason. But CNN needs to stop confusing its viewers by not specifically naming the program (I’ve heard it referred to by the hosts as “Hot Talkers” but again…nothing on screen in terms of graphics/lower-thirds lets the audience know that) and billing it as editorial. As a result of the show not labeling itself correctly, Twitter is now aflutter with tweets around “CNN standing with the protesters” that is compelling the aforementioned reactions both positive and negative — and, in the process, painting the stance as one that represents CNN as a whole.

As for the hands exhibition itself, the opinion here (and, yes, this is an opinion column) is that it basically was misleading. It can be argued that the protests yesterday were more the result of the Eric Garner grand jury decision than the one not to indict Darren Wilson. As noted in this space before, the Garner case brought a near-consensus (with exceptions since there always are) across the country and especially in the normally-polarized cable news world: Most agreed the decision was wrong, myself included. Many saw the video (and more importantly, heard the audio) of the Garner arrest and felt the case should have at least gone to trial.

The Brown non-indictment was a completely different story — with the country much more divided on that outcome — because (according to the evidence) of Brown being the aggressor with the arresting officer by punching him and going for his gun. Again, go re-argue the outcome in the comments section–the point is that Brown and Garner are two very different cases that just happened to have grand jury decisions within nine days of each other, sparking what we witnessed on the streets of Manhattan and D.C. yesterday. But by The Four holding their hands up yesterday following a discussion around the protests, it blurred the lines between the two cases, almost implying Ferguson and Staten Island are somehow connected.

Following some interesting reactions to the display, Hoover later responded:

.@wkamaubell @CNN this is not Left v. Right, this is about equal justice under the law.

And that’s all well and good, but was the Brown case not about equal justice? It wasn’t like an all-white grand jury decided not to indict (three African-Americans were on it), and more than a few black witnesses came forward supporting Officer Wilson’s side of the story. And it’s not like anyone (objective) is disputing Brown struck Wilson or went for his gun. In fact, most highly-regrarded legal scholars say the grand jury in Ferguson couldn’t be any more fair.

Hoover’s argument more applies to Garner; not so much to Brown. But if you were watching The Four yesterday, one could only conclude that Brown and Garner were incidents that mirrored each other.

Moving forward, CNN needs to decide what 3:30 p.m. on Saturday on its network exactly is. If the show is indeed Hot Talkers, take 19 minutes out of a day and craft a press release indicating such. Then take another three minutes and create some chyrons/graphics/lower-thirds. Easy breezy.

But the theory here is a show can’t be cancelled if it never technically existed. Having said that and controversy aside, the show has promise, decent chemistry (thanks primarily to Hoover and Kohn) and sits in a pressure-free timeslot (from a ratings perspective) in the middle of Saturday afternoon. Will it eventually move to weekday early afternoons, ala Outnumbered, just without the rotating guy? That’s what CNN and Jeff Zucker are likely trying to decide right now.

CNN has an interesting new opinion show on Saturdays at 3:30 p.m. ET. Hopefully they’ll eventually come around to actually billing it as such.

We’ve reached out to CNN for comment, and will update accordingly.

Watch a clip from it below, via CNN: