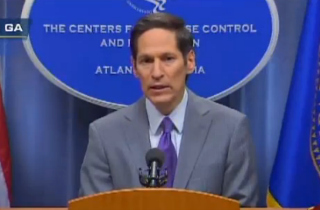 Most stories in the world of cable news are nebulous, fleeting…here one day, forgotten the next with no follow up. Some have legs of a week, and once or twice a year, there’s those that can lead your average A Block for an even longer time (See: Missouri, Ferguson).

So what category does Ebola fall into? If the virus continues to slowly expand its reach in the manner we’re witnessing now, it may be in one all by itself. Just look at the reaction of today’s news that a second healthcare worker who treated the late Thomas Eric Duncan now has been diagnosed with the virus: It’s almost wall-to-wall. Know this: If not for being at pseudo-war with ISIS (and losing at the current time if additional territory and towns taken by ISIS despite U.S. airstrikes are any indication) and the midterm elections coming in less than three weeks (which is largely being met with audience apathy thus far on a national news scale), Ebola would be the O.J. Simpson case of our time.

And if the virus continues to spread domestically, even if that means news of a new case only every few days, expect it to get completely to the O.J. level very quickly. Of course, don’t expect any of that coverage to as responsible as it should. Just look at the what some grown adults with big titles are already sharing out loud:

– Fox’s Keith Ablow actually stating a sitting president dislikes his country so much, he’s willing to allow a deadly virus into the country to make his own citizens pay with their lives.

– Salon’s Joan Walsh and MSNBC’s Joy Reid making Ebola a red/blue issue, with the former declaring before Mr. Duncan’s body was even cold that his death was the result of being treated in “Rick Perry’s Texas“, and the latter piggybacking on that statement by making the poignant point of Ebola spreading in a “private hospital in a red state.”

Want to know why trust in media is at an all-time low?

Since it’s 2014, a racial aspect has been introduced into the conversation as well, courtesy of Duncan’s nephew. A few days before being re-admitted to the hospital, Duncan was released despite having a 103 fever. Big mistake, no doubt…but given that an estimated 210,000 deaths result from hospital error each year (according to research conducted by Forbes’ Rick Ungar) regardless of a patient’s skin color, accusing the hospital of treating a black patient any differently than an Asian patient, a white patient or any other kind of patient only adds to the toxic talk disguised as educated debate.

For now, at least according to President Obama, the chances of an Ebola epidemic in the U.S. are “extraordinarily small”. CDC is saying the same thing. Whether you believe either the president or the CDC is up to you (a Washington Post-ABC poll shows two-thirds of Americans are worried of a possible epidemic). To that end, Ebola has become is the new shark attack story in cable news. High on odds, no shortage on coverage.

Want to know what virus kills thousands–even tens of thousands–Americans per year that most of the media barely mentions? The flu. But according to a story by Frank Bruni in the New York Times this week:

During the 2013-2014 flu season, according to the Centers for Disease Control and Prevention, only 46 percent of Americans received vaccinations against influenza, even though it kills about 3,000 people in this country in a good year, nearly 50,000 in a bad one.

The old saying is fear is the greatest motivator. So in the Ebola narrative, why not book the author of the 1987 fictional book, Outbreak as CNN did last week, and call him an expert on the topic in the process? As Jon Stewart’s writers summed up perfectly on The Daily Show: “But first, a weather report from the writer of ‘Sharknado.”

Two in three Americans fear Ebola could be become an epidemic.

The media knows this despite declarations from the CDC to the contrary. That’s not to say questions around whether hospitals are prepared or if the proper protocols are in truly place shouldn’t be asked, nor does it mean the public shouldn’t be properly educated on the topic. The question is: Has the shark already been jumped in going from substance to sensationalism?

But with each case announced, even if those announcements are periodic, expect to see medical experts occupy your screen the same way aviation experts got their very extended 15 minutes during the missing Malaysian plane (MH-370) coverage.

Expect Ebola–even if relatively contained–to endure prominently in the media just as long.