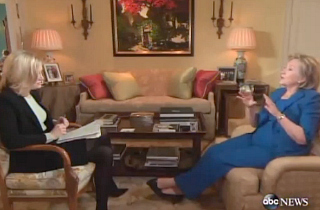 Hillary Clinton is a skilled politician and a figure that has been in the public eye for more than two decades.

Diane Sawyer is a skilled interviewer who has been in front of the camera eye for over 35 years.

So when the two sat down for Mrs. Clinton’s first primetime interview to kick off her book tour and reintroduce herself to the American public in the likely event she runs for President, the only word that first came to mind was familiar. The 66-year-old Clinton–who traveled nearly one million miles in visiting 112 countries during her tenure as Secretary of State—looked great, appeared rested. And after the one hour special was complete, the only word to come to mind was safe.

Safe is the word most often seen when it comes to any book review you see when it comes to Hillary’s book, “Hard Choices“. We’re not talking conservative outlets that aren’t enthralled with the book, either. Politico’s Mike Allen calls it a “newsless snore,” adding that it “was written so carefully not to offend that it fuel the notion that politics influxes every part of her life.” The New York Times book review sings the same song by declaring, “There is very little news in this book.” The New Republic isn’t as kind, calling it “the low-salt, low-fat, low-calorie offering with vanilla pudding as the dessert. She goes on at great length, but not at great depth.” But if the goal was to offer up nothing Republicans can take aim at, mission accomplished.

Same goes for the Sawyer interview. In fact, the only memorable part came when Sawyer seemed to surprise Mrs. Clinton by asking about the current wealth she and her husband have amassed as being a detriment to connecting with average Americans. Hillary’s answer was almost laughable, as she recalled how she “struggled” to purchase “houses” after Bill and she left the White House “dead broke”.

This portrayal fails to account for the $1.6 million Mr. Clinton earned during his two terms, which included a $50,000 in a tax free annual expense account, free transportation, meals, dry cleaning, etc.. Legal bills from Whitewater and Monica apparently weren’t cheap, but all First Families have a windfall waiting upon completing their time at 1600. There are no struggles. That said shortly after leaving the White House, Hillary’s book advance for “Living History” was $8 million alone. Just in 2001, Mr. Clinton made over $9 million in speeches. The Clintons proceeded to purchase two “houses” in Washington and Chappaqua, which went for $4.55 million combined. If that’s struggling, 99 percent of Americans—the non-richest one percent—would sign up for that.

Sawyer countered: “You’ve made five million making speeches? The President’s made more than $100 million?” Clinton’s response was again odd, almost Romney-like in downplaying her wealth: “First of all, we had to pay off all our debts, which was, you know, he had to make double the money because of obviously taxes and then pay off the debts and get us houses and take care of family members.”

If the book reviews and Sawyer interview are any indication, Mrs. Clinton has the same issues in 2014 that she had in 2008: Too much part of the establishment, not terribly inspiring (outside of what she potentially represents as the country’s first female President), too risk-adverse. The difference may be that Elizabeth Warren (if she runs) is no Senator Obama. Know this: In 2004 or even 2000, a 2008 Hillary would have no problem dispatching the likes of Al Gore or John Kerry, also seen as stale and establishment figures. Candidate Obama, conversely, was exactly the wrong opponent for her to face: Also historic, inspiring, a relative outsider with a world view.

Maybe playing it safe is the right strategy, especially when considering that Bill Clinton can fill the void on the charisma front.

Correct approach or not, safe and familiar will be the two words that come to mind as the Clinton media tour moves forward this month.