Concha: President Now Forced to Do Obamacare Sales Pitch on His Own? 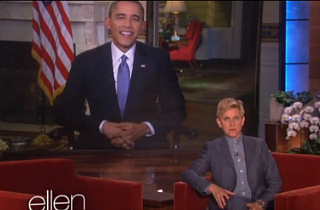 “How can a president not be an actor?”
–Ronald Reagan

Our 40th President, of course, was an performer on the big screen before getting into politics. Our 44th and current President has never acted, but does have a future in Tinseltown if recent performances are any indication.

Given how polarized and angry media has become, the last sentence may be seen as snarky and disrespectful. Please note: It’s not. From his Between Two Ferns on Funny or Die Zach Galifianakas to his talk with Ellen DeGeneres that aired today, President Obama is most effective when doing entering these kinds of forums.

So it is hilarious to see the angry reaction in conservative media — now five years into his tenure — of Ellen’s fawning interview with the President. What? You don’t get it by now? Believe it or not, most people who work in entertainment will always support a Democratic president no matter how poorly things are going for him. So when Ellen’s website promotes the interview the following Pyongyang-ish way, you shouldn’t really be surprised:

“Now the leader of the free world, and the champion of comedy will get into the President’s new health care initiative. From L.A. to D.C., Ellen rolls out the red carpet for the United States’ fearless and brilliant head of state!”

Totally toady? You bet. Ellen called the ACA “successful” after touting the new HHS number of five million signups (interesting how HHS always seems to have positive numbers ready in a millisecond, but can’t ever seem to determine how many enrollees have actually paid, which tends to be important in these situations). No matter. This isn’t ABC’s This Week or the old Meet the Press. It’s an entertainment show and the guest is as big as it gets for any program, so why rock the boat? Particularly when the host (annual salary according to Forbes: $56 million) is a big supporter.

The President’s critics argue that continually engaging in forums like this — as opposed to holding press conferences — diminishes the office (for those keeping score at home, there have been exactly zero solo White House pressers thus far in 2014 despite more than a few things to discuss). Guess what? They’re right about that.

But this is one of those instances when two answers are correct. Mr. Obama isn’t wrong to try to save his signature achievement in trying to convince more folks—particularly young invincibles—to sign up. And whoever is recommending that leveraging Funny or Die or Ellen—with the latter being at a popularity high thanks to a very successful hosting stint at the Oscars—is at least sending him to the right venues in terms of getting the word out to an elusive demographic.

But here’s what is sad about seeing the President pushing his health care plan like he was trying to make President’s Club at a sales organization by beating his quota:

He’s doing this tour completely on his own.

There isn’t one Democrat doing the same.

They can’t; not in an election year. Not with a law so unpopular. Not with numbers that say if the 2012 election was held again today, 71 percent of Obama voters would not vote for him again (Source: Economist/YouGov.com). Not with an ACA that only six percent of Americans say is working and should stay intact as is (CBS/NY Times). Not with everyone from Chris Matthews to Robert Gibbs stating Democrats could “absolutely” lose the Senate, thereby putting the House and said Senate into GOP hands, thereby rendering the President completely powerless for the final two years of his term.

So now the President becomes Tom Hanks in Castaway. Alone on a political island that his former crew can’t sail away from fast enough… with Hillary as Captain of the U.S.S. NiceKnowingYa. As a result, his only public friends remaining reside in Hollywood, work in showbiz. So in a Hail Mary attempt to save a law that unofficially bears his name, he puts on the acting hat. Uses his humor. Lays on the charm. He does it as well as anyone in Between Two Ferns and young viewers are loving it if the number YouTube page views mean anything, and they should. It’s very good, very effective. And if the numbers are truly what they are when it comes to those who have signed up and paid, it still won’t be remotely enough for any Democrat to attempt to hang their hat on leading up to a horrific November for the party in blue.

Regardless, President Obama should use every affable venue possible to sell his signature achievement. He’s got nothing to lose at this point.

But when the product is already so flawed, so ridiculed, so incapable of overcoming the worst first impression of any major government program in history…

Well, even the best actor can only take a terrible script so far.