Concha: Reflecting on Media Performance After 10 Days in Ferguson

Concha: Reflecting on Media Performance After 10 Days in Ferguson 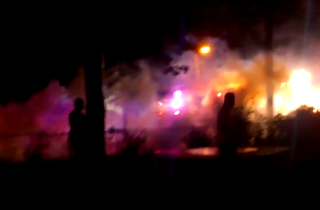 It’s now been ten days since an unarmed Michael Brown was shot and killed by police officer Darren Wilson in Ferguson. A huge story that has knocked ISIS (until the unspeakable news of James Foley’s beheading that broke Tuesday), Gaza, Ukraine and the border crisis off the front pages and A-Blocks (TV-speak for the lede) to be sure.

Ten days of media coverage to absorb and reflect upon.

First, some context: Over just one holiday weekend last month in the city of Chicago, 82 people were shot, 14 killed. According to The Chicago Tribune, five of those deaths were at the hands of police, including two teens. But the national media didn’t descend on the Windy City to discuss the crisis happening there because of at least three elements: No protests, no tear gas, no dramatic optics.

But the Michael Brown case is different, right? Except it really isn’t. Take, for example, the late 16-year-old Warren Robinson, who in July was chased by Chicago police after matching the description of someone who was firing shots in the city’s volatile Gresham neighborhood. Upon finding Robinson hiding under a car and suspecting he still had a gun on him, police shot him multiple times.

Officers say they repeatedly instructed Robinson to drop his weapon, but he allegedly refused. Officers argue they fired out of self-defense. Several witnesses claim Robinson was unarmed and always showed his hands to police during the entire confrontation. Police refute this claim. An investigation is ongoing.

But since shootings are so common in Chicagoland — 2,185 in 2013 alone (according to the Tribune) — there simply aren’t enough days on the calendar to mass protest every shooting, every controversy. It’s all too commonplace now, almost expected on a daily basis. As a result, the national media leaves coverage of the carnage of the country’s third-largest city to its local affiliates, where, as the song goes: “It’s all the same / Only the names will change.”

As far media mishaps in Ferguson, Mo., as we witnessed after the Boston Bombings last year, there are plenty to choose from. And, as we’ve seen on more than a few occasions lately, social media is playing a bigger role in this regard. The gold medal goes to MSNBC’s Chris Hayes — lacking an editor as filter, given the platform — tweeted:

Wait, what? A national TV host on a major cable news channel just gave an unverified report that a dead body is just lying in the street? Why aren’t there any reports from other outlets about this? The tweet was retweeted over 4,500 times.

Except the body — which was very much alive — was later reported (12 hours later) to be a car crash victim completely unrelated to the protests. No matter. The original Hayes tweet went viral and more emotions and tensions were stirred for no apparent reason.

Hayes’ boss should have told him to ease up on social media reporting at that point, but, of course, that didn’t happen. On Tuesday, the 35-year-old host declared via Twitter: “I think the security problem in Ferguson, is not solvable through policing. Until charges are brought against Wilson, this will go on.”

Nope. No grand jury, no further evidence needed. Mr. Hayes would later blame this very publication for making a “laughable mischaracterization.” But that’s the funny thing about tweets…they all come in one flavor: Verbatim (and therefore not open for much interpretation) and almost always in need of clarification.

The Huffington Post — the most-read political publication on the web; even more than Drudge or TheBlaze — also hasn’t done itself any favors. Its blaring headline “ARREST HIM!” shortly after the autopsy results were released was both premature and an obvious attempt to play to a crowd. But with great power comes great responsibility. And given the size of its reader base and the influence it wields, HuffPost needs to leave the editorial page off the front page to avoid inflaming matters already teetering on the brink.

One of its reporters on the ground hasn’t exactly enjoyed a good week either. Ryan Reilly, one of 12 reporters arrested over the past 10 days in Ferguson, decided crowdsourcing might be a good idea in determining if some yellow thingies he found on the street were rubber bullets. You can imagine the reaction when that tweet went out and the answer to Reilly’s question were “earplugs”, not “rubber bullets”:

I believe these are rubber bullets, can anyone confirm? #Fergurson pic.twitter.com/iCsFi6qoIa

I retract that suggestion, they are earplugs. Apologies.

Reilly not knowing the difference is somewhat understandable (at first glance, I wouldn’t know exactly what a rubber bullet looks like either). But in the future, sending a photo of the object in question to an editor or expert on staff (if available) privately is clearly the way to go. The need to share every thought, every inquiry on Twitter is getting enough reporters and hosts in trouble already. Crowdsourcing is fine for opinions of viewers or readers. For fact-checking and verification? Not so much.

Finally, Rosemary Church of CNN also showed why live TV can be hazardous to one’s career. It appears Ms. Church did not make the suggestion of Ferguson police and National Guardsmen using water cannons instead of tear gas for crowd control with any malice or intent to inflame the situation. Instead, she simply didn’t know her history — having not witnessed in real-time (being only a very young child at the time) the horrible images of water cannons fired upon civil rights activists in the ’60s.

Not an excuse, however.

In the old days before YouTube and Twitter, Church’s moment would have likely disappeared into thin air, save for a few buried articles in newspapers a day or days later by media scribes. Today, it lives forever on the Internet, having already been viewed tens of thousands of times by those who otherwise wouldn’t have seen it.

That’s not to say it’s all been bad, particularly on the social media front. Twitter — now the unofficial sixth news network behind CBS, NBC, ABC, Fox and CNN — has not allowed the police to control the narrative. Having no filter can lead to the results outlined above, of course, and this must be addressed by execs before more hosts and reporters tweet before thinking and subsequently reflect poorly on a network or publication. But like Boston in April of 2013, social media has become as much a part of reporting as anything seen or heard on TV. And there’s no going back.

Ten days have passed since Michael Brown was shot and killed by Ferguson police officer Darren Wilson. Since that time, dozens — mostly young black men — have been shot 300 miles north in Chicago, some fatally. But don’t expect a media trek north on I-55 after things finally calm down outside of St. Louis.

In the meantime, more mistakes will be made.

After all, this is the age where the speed of reports is more valued than the need to be accurate.

The carpenter golden rule — which absolutely applies to journalism — of “Measure twice, cut once” has now been replaced with another old saying: “Don’t ask for permission, beg for forgiveness.”