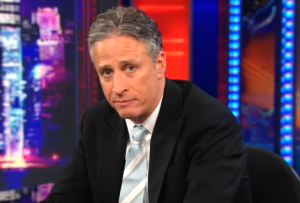 White privilege entered the ring Wednesday night in the latest round of Jon Stewart vs. Bill O’Reilly. For those who don’t follow this stuff very closely, Jon and Bill have forged an unlikely alliance on the booking front. And every few months, one appears as a guest on the other’s program… with ratings on those evenings always going further through the roof for the two already-most dominant male hosts on cable.

So while the 18-year Factor host was ostensibly supposed to talk to 15-yearDaily Show host about the former’s latest #1 New York Times bestseller, Killing Patton, the conversation quickly turned to O’Reilly’s assertion that there is no white privilege in America anymore, calling it a “fantasy.” To make his argument, he cites stats around what he calls “Asian privilege”, which includes lower divorce rates, strong two-parent family environments and higher educational achievements of Asians than whites in the country (while juxtaposing those stats against those of African-Americans). Agree with it or not — and the smart money is there are plenty of fun, civilized conversations happening in the comments section below — O’Reilly’s argument is unique, well-presented and therefore compelling television.

Enter Mr. Stewart last night, who asks O’Reilly to admit that white privilege does exist. O’Reilly counters with the points made above. Things get testy for the otherwise-friendly rivals from there. Again, quality television that will carry on to water coolers and Twitter/Facebook tweets and posts the following day and through the rest of the week.

But the question nobody — including O’Reilly — didn’t ask is one that must be asked: Who exactly is Jon Stewart to be cross-examining anyone about white privilege considering his own shop’s demographic makeup?

During last night’s debate, Stewart specifically pointed out that “white men set the system.” Within Comedy Central’s Daily Show — its highest rated program and a cash cow for nearly two decades — Stewart holds most or all of the power. That includes having major say in who get hired to the most important position (outside of host) on the Daily Show staff: The writing team.

All told, Stewart has 14 exceptionally talented staff writers feeding him the gems we hear every night. It’s why John Oliver didn’t miss a beat when filling in for Stewart during the host’s summer 2013 sabbatical. As a result, Oliver became the hottest free agent in the business and was quickly scooped up by HBO, where the Brit was wise enough to take then-longtime-Daily Show head writer Tim Carvell with him.

But of Stewart’s current batch of 14 writers, 12 are white and 10 are male.* The two non-whites on staff consists of one African-American (Travon Free) and one of Iranian descent (Zhubin Parang).

So the next time Stewart talks about white men “setting the system” during a Daily Show broadcast, should his photo be placed over his shoulder during the story? And if the numbers above are any indication, it appears the fictional War of Women is alive and quite well in Mr. Stewart’s neighborhood as well.

But the Daily Show features plenty of diversity on the guest front, right?

Well, not quite. Here’s what Chloe Angyal of Reuters reported in August:

When you factor in race, Stewart’s numbers start to look very grim indeed. A resounding majority – 68 percent – of his guests were white, and of the very few African-American guests who appeared on his show, all were entertainers – the band Wu Tang Clan and the comedian Kevin Hart. Women of color fared similarly poorly on The Daily Show: Out of 45 guests, just three were women of color.

But before the next time these two get together, perhaps Mr. Stewart will exercise a little self-reflection before lecturing others on white privilege. Because that, along with sexism as it’s defined in 2014, seemingly exists both behind the scenes and on the very show he hosts and controls.

*[Correction: Stewart currently employs 14 staff writers, not 18. The numbers have been updated accordingly.]