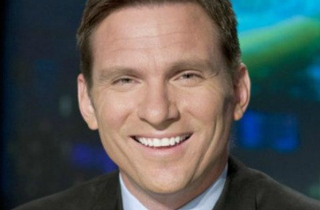 Getting to the top of the mountain in news—reporting or hosting or both on the national level—can take years, even decades, if at all. Many start out in small towns or cities like Reno, Binghamton, El Paso, Scranton, then graduate (if warranted) to middle tier cities and perhaps, perhaps with a little luck, a few connections and a little more luck, have someone of importance in a big city notice your work on either an audition reel sent or randomly via the web.

So if you’re, say, CNN’s Bill Weir, and you graduate Pepperdine with a degree in journalism, grind it out as a weekend sports anchor in the spring break destination that is Austin, Minnesota…only to trade up to that other hotspot that is Green Bay…before finally making it as a news anchor in Chicago, which eventually leads to the big boy network that is ABC and its esteemed Nightline…and after winning several awards, go to CNN as a host, reporter and content creator all in one, well…one has to think it wouldn’t be wise to risk throwing all of that way over one utterly ill-advised, summer-of-sophomore year Tweet:

Will Weir be suspended or fired? Not likely because of the selected target (Fox, where attacks on the network and its online extensions — Fox Nation — are a cottage industry) and because he was at least smart enough to apologize after a person of importance likely got in his ear to remind him how someone in his position is supposed to conduct himself, even on social media.

Let’s put it this way: Would another ABC-to-CNN alum named Jake Tapper ever consider sending out such a juvenile thought? Rhetorical question. You want to argue over coverage of climate change? Knock yourself out. To do it in the fashion Weir did? After nearly 25 years in the business, he should absolutely know better.

What’s that, you say? Everybody’s doing it these days? That may not be too far off if recent history is any indication. Doesn’t matter if it’s Anthony Cumia of the former Opie and Anthony Show throwing away a 20-year national radio career over one hate-filled, racist tweet, or reality star Adam Richman wishing one of his “fans” committed suicide…or Justine Sacco, formerly of AIC fame hoping she doesn’t get AIDS on a visit to Africa before delivering a “just kidding, I’m white!” punchline. All wake up with regret over those 140 characters or less every morning.

But Weir isn’t a shock jock, a non-media-trained reality star or PR executive behind the scenes. He’s a big-time hire expected to do big things on and off camera during CNN’s transition in its overall strategy and presentation. So before calling any competitor “willfully ignorant f*cksticks” and having that colorful candor retweeted over 1,000 times and getting major attention from this very media blog to other big publications like The Huffington Post, the 46-year-old veteran might want to think back to the days when he was struggling to make it in an insanely tough business.

Here’s what he once told TV Newser in 2008 about the early days of his career:

One-man-banding in the snow with those 95 lb. Ikegami cameras and decks. Live shots from the Spam Jamboree in Austin, Minnesota. Driving to the Upper Peninsula to interview a guy who shot a 13-point buck through his kitchen window.

One-man banding isn’t fun. Nor is choosing a career that is cutthroat, impossibly political and devoid of anything resembling ironclad promises or guarantees.

Weir should remember this the next time he decides to tweet first before thinking it through.

Said it before, I’ll say it again.

Anchors, personalities, reporters all represent news organizations the way an employee represents a company or business. When he or she wants to get something on the air, it needs to be pitched and approved by a producer, editor or both.

The same should go for all tweets. And if someone like Weir conducts himself in the kind of amateurish way seen Wednesday night, the rule should be simple and swift: The account gets suspended the way you put a misbehaving kid in a corner for a timeout. And if happens again, well, start working on that resumé.

For those who find this kind of behavior entertaining, have no fear…

Because as we keep witnessing, some of these folks simply don’t appreciate all the hard work it took to get to the top of the mountain in the first place.